Whenever I have a new side project idea, the need to build a quick prototype or even opportunity to build something from scratch at at work, I keep coming back to Elixir time and time again.

Elixir has a strong pull on me, and not without reason. The language creators have done an exceptional job at building not only a fantastic language but also a thriving ecosystem.

The following 5 are some of the reasons why I keep coming back to Elixir.

Mix is a build tool that ships with Elixir and provides tasks for creating, compiling, testing, debugging, managing dependencies and much more.

Running that command will generate our new project with the boilerplate structure and necessary files. The output will look something like

The most important file that is generated is our mix.exs file which contains the configuration for our application, dependencies, environments and the current version. The file might look something like this:

Overall, mix is really powerful and easy to extend; and is one of the reasons why using elixir is so friendly to new developers.

Credo is a static code analyzer for elixir, that has a very particular focus on teaching and building code consistency. 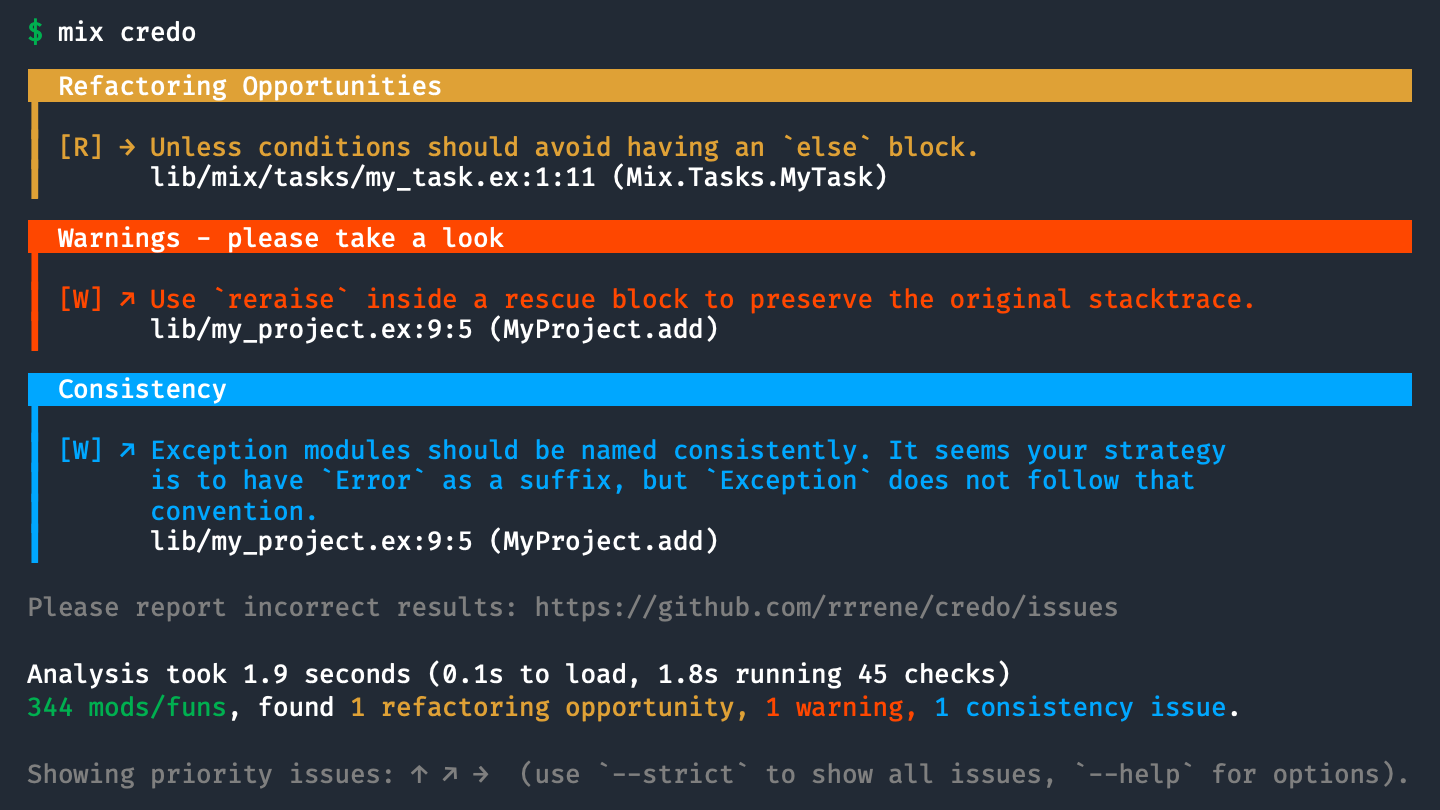 Dialyxir is a mix wrapper for Erlang Dialyzer; which is another tool for static code analysis.

While both tools are static analysers they fill different needs and offer different kinds of insights into our code.

Credo is better suited to see of our code follows the common ‘good’ code practices accepted by the community; while Dialyxir on the other hand let us catch things like type errors and unreachable code.

One of Elixir’s biggest selling points is the concurrency support, and the scalability and fault tolerance that comes with it; at the core of this concurrency model we have elixir processes.

Processes in the context of elixir are not the same as operating system processes, elixir processes are incredibly lightweight in comparision and can be describe as having the following characteristics:

Which all it does it spawns a process to execute the anonymous function; to more complex uses cases with message passing and supervision trees. One of the main abstractiosn that builds upon these processes is Tasks.

Elixir syntax is one of its main appeals; and at times you can clearly see the Ruby influence in the language and the clear focus on developer happiness and usability.

But looking at the snippet above makes it clear that while syntax is highly readable this is not Ruby, there are a couple things happening in the code above:

Elixir, in my opinion can pack a lot of expressiveness into a very small amount of code that is also highly readable.

Phoenix is a web development framework written in the functional programming language Elixir. Phoenix uses a server-side model-view-controller pattern. Based on the Plug library, and ultimately the Cowboy Erlang framework, it was developed to provide highly performant and scalable web applications. - wikipedia

Saving the best for last we have the Phoenix Framework, which often gets compared to the Laravel or Ruby on rails; but in my honest opinion is much much better.

Frameworks like RubyOnRails and Laravel suffer of a capital sin, there is too much freaking automagic. By this I mean those frameworks try to abstract too much and hide too much complexity to the point where they become more of a hindrance in certain scenarios.

Phoenix, has the right amount of scaffolding and abstractions without taking anything away from your control. Getting a Phoenix project up and running is easy as:

LiveView enables developers to build realtime interactive apps without touching any Javascript; it’s all done with server side logic.